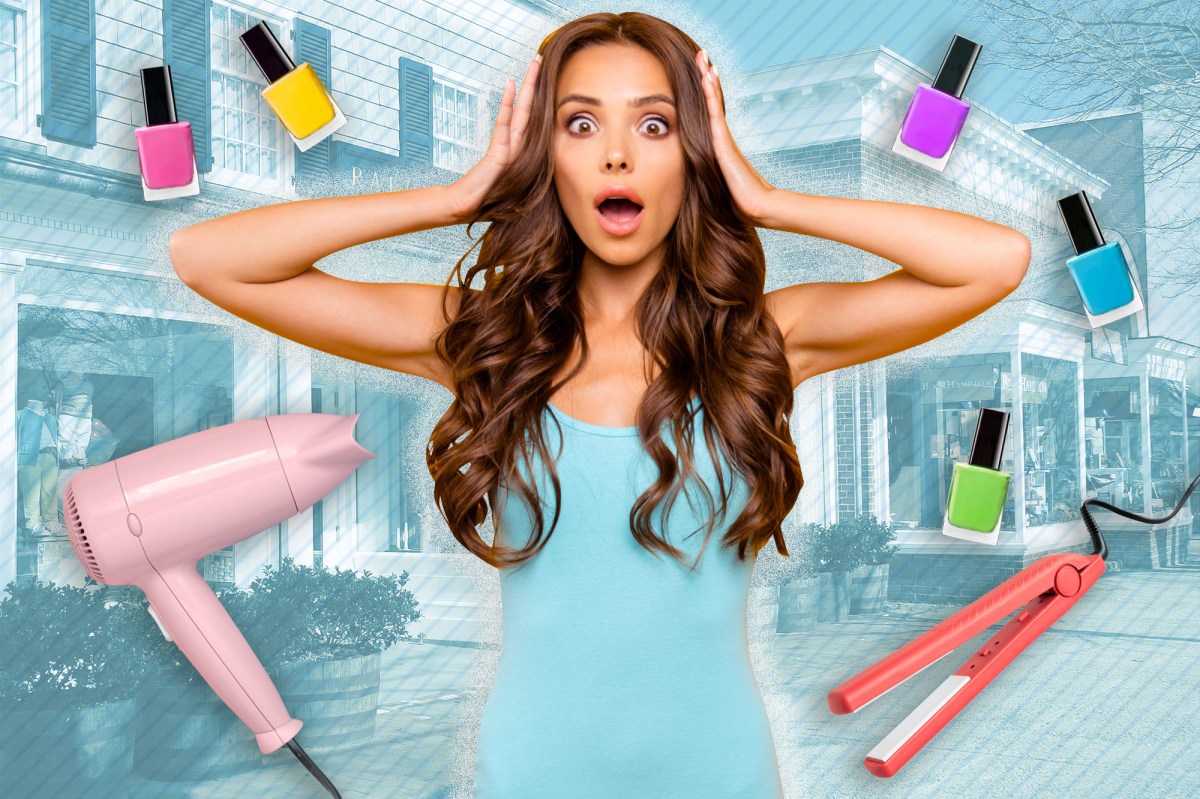 This summer, the Hamptons’ wealthy seasonal residents are learning a new word: “No.”

Pity the nicely dressed gentleman who walked into Xavier Merat’s chic Salon Xavier last week and asked for a manicure to go along with his haircut.

He was told — gasp — that it was impossible.

“He asked countless times before he walked out the door because he just didn’t believe we weren’t able to fit him in,” Merat told The Post. “He was like a kid who wanted candy and couldn’t get it.”

Merat used to employ six manicurists at his Sag Harbor salon; now there are only three.

“Nobody wants to turn away business. It’s frustrating because we have the space but not the manpower,’’ Merat explained.

All over the East End, businesses are short-staffed this summer. You see the “For Hire” signs everywhere, from home services — lawn maintenance, pool care, plumbing — to salons, restaurants and tony boutiques.

Massive stores like Kmart in Bridgehampton, where even the wealthy (or their help) shop for household essentials, have only a few checkout lines manned and nobody on the floor to help customers. Adding to the mayhem, the area is more populated than ever, as people who might normally travel overseas have instead decamped east in full force.

Blame the skeletal labor force on three factors: a lack of J-1 visas due to COVID that prevented the usual influx of workers from Eastern Europe and Ireland; the increasingly prohibitive cost of staff housing; and the lure of collecting enhanced federal unemployment benefits.

“You have to throw so much money at people just to get them to show up for work,” said Andrea Correale of ­Elegant Affairs, a high-end catering company. “And many of them still won’t come in before September when [the enhanced] benefits run out.’’

It’s all increased the need for exercising patience, a virtue not always displayed on the East End.

The diminished workforce has increased the cost of parties by more than 30 percent, Correale added, but even when price is no object, people often can’t get the date or specifics they want.

“Our clients command a high level of service, so when you tell them you can’t accommodate them 100 percent, they are not always thrilled,” she said, adding that most DJs and cater-waiters were booked up for the season by early June. “We are turning parties away left and right — it doesn’t matter how much money they have to spend, the answer still has to be ‘No,’ a word they aren’t accustomed to hearing.’’

Bianka Lefferts, owner of 27 Hampton Salon in Southampton, said her clients are now booking their appointments a month ahead, and while she at one time had seven manicurists, there are now only two. Lefferts recently ran into one of her former nail technicians and asked if she would come back to work. But the ex-employee is thriving by doing only house calls — charging more and happy not to share the money with a salon.

Although, Lefferts said, the nail tech refused her’ plea return, she did look at the salon owner sympathetically and offered: “I’ll come to your home if you really needed your nails done.’’

Over at Manna, a restaurant that opened this month on Cold Spring Pond in Southampton, the crowds were piling up on a ­recent Thursday evening.

Hungry customers paced anxiously as platters of large crustaceans and seared wild salmon passed by, and the aroma of Thai curry mussels wafted from the dining room while the time for their reservations expired.

Meanwhile, only half the tables were filled.

Adding to the chaos inside, hopeful diners continued to ring the phone incessantly. No wonder a newbie waitress retreated to the walk-in refrigerator in tears and had to be coaxed out.

“It’s very stressful for those who are working,” sighed Jesse Matsuoka, Manna’s co-owner. “People are hearing good things and want to try the restaurant but we just can’t keep up. We are a 200-seat restaurant and only operating at 100 seats.”

That’s not because of COVID ­restrictions, either.

Said Matsuoka: “I am turning away all this business because we don’t have the staff to accommodate these people.’’

Keeping cooks is also tough. “The kitchen side has become a war zone because wealthy [restaurant owners] are willing to increase the wage base to the point where smaller operators can’t compete,” he said.

Plus, “my top servers are walking away with $2,000 a week, but it’s a lot of work and pressure,” Matsuoka admitted. “Some kids figure they can make a decent amount of money with unemployment and pandemic payments while enjoying the summer playing video games, going to the beach and smoking weed.”

Out of desperation, his partners have pressed their own children into service.

“If my son was slightly older than 9 months, I would put him to work at the host stand,” Matsuoka joked.

Over at Union Sushi & Steak  in Southampton, owner Ian Duke is filling in for the lack of staff by taking on a variety of roles, from doorman to dishwasher to ­bartender.

“Everybody in the restaurant business is working their butts off,” he said. Although it had been a long time since Duke  found himself on the working side of the bar, he’s trying to see the silver lining in the situation. “You get to see all the things going on in your business in a firsthand way — though I would far rather be doing this in October than at the height of summer.”

Plus, he said, “customers find it extremely entertaining to see me standing behind the bar and they enjoy asking me to make them some new mule, but I actually like the interaction, and doing dishes is therapeutic.”

One thing hasn’t changed in the Hamptons, though. If you’re willing to pay enough, money still talks.

Scared she wouldn’t be able to beautify when needed, one yacht-residing client has salon owner Merat on retainer: $300 a day for the month. And that doesn’t cover the actual cost of styling — an additional $600 fee for house (or yacht) calls.

“We all may be working double time,’’ said Merat, “but leave it to clients in the Hamptons to provide us with stimulus checks.”