While electronics plays a critical role in everyday life, alternative technologies can theoretically replace them. What is pneumatic logic, what did the researchers demonstrate, and can pneumatic systems ever be a viable replacement for electrical systems?

Of all technologies, electronics is the most efficient way to process, store and retrieve data. Thanks to the ability for transistors to be reduced in size to unimaginable sizes, the entire collection of all fiction work ever written by man can be stored on a silicon device smaller than the size of a fingernail.

However, transistors are not the only way to achieve data processing and storage; just about anything controlled can be used to construct computational devices. For example, Charles Babbage, in the 1800s, created a mechanical computer called the Difference Engine. Another example of non-transistor computation is the relay. While the relay is an electronic device, controlling mechanical motion can be used to build complex devices, including computers and industrial controllers.

Pneumatic logic uses air instead of electricity to realise logic functions using solenoids, relays, and valves. For example, an AND gate can be constructed using two inlets, a single outlet, and a valve connected to both inputs (see image below). If any one of the inlets is pressurised, the joint valve will close on that input resulting in no output. The valve is centred if both inputs are on, allowing airflow from both inputs to the output.

There are many other configurations of valves that can create other logic functions, and these can be combined to perform combinational logic. Furthermore, pneumatic systems can readily be converted into hydraulic systems whereby air is replaced with a liquid.

Recently, researchers have developed a pneumatic RAM device that can be programmed to remember different pneumatic states. Simply put, each RAM cell in the device utilises a valve whose state is controlled using either atmosphere pressure or a partial vacuum. The valve is constructed using a channel that allows air to flow through, a rubber seal, and a cavity that holds the programmed bit. 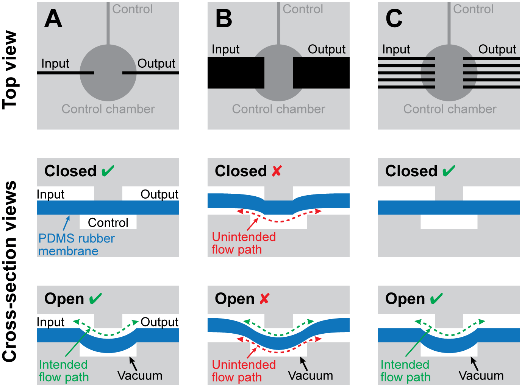 What makes the research unique in this example is that RAM has enabled a pneumatic system to reduce the number of actuators and electrical systems needed to operate. For example, a robotic hand with four fingers requires four pneumatic controllers, with each one directly connected to each finger. However, using the memory matrix enables 8 fingers to be controlled using four inputs, thus reducing the total needed hardware to control pneumatic systems.

The simple answer to this question is no. Pneumatics are ideal for large industrial systems but will most unlikely be used to control small robotic systems. The ability to fit a billion transistors onto a single chip allows for the creation of highly advanced logic circuitry that can outperform any pneumatic system.